We have had a very successful winter in Gorge Harbour; with a well sheltered mooring and the attentive care our boat received from Barry and Amanda,  also we greatly enjoyed meeting and dining with their interesting friends.

We left Cortes Island bound for Campbell River to lift out and change our ice worn prop for a new Bruntons Autoprop which was on it’s way from England. Hauling out at Ocean Pacific Marine Yard was a very efficient operation and weather permitting we planned to complete our jobs within the week. 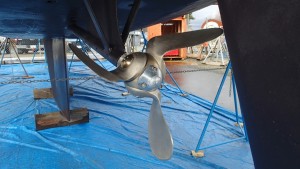 The rainy season of the BC coast is coming to an end and we were blessed with five days of dry sunny weather to repair ice damaged paint work and anti foul the hull.

Our prop arrived mid week and fitted like a glove.  All enabling us to back in the water after exactly one week, we then spent a couple of days trying out the new prop and have been amazed by the improved boat speed both motoring and sailing.  Motoring speeds were up by 0.7 knot at the same revs as before and sailing speeds in light winds were up by about 1 knot.

We should have had one years ago, one of the best improvements we have made on Arctic Tern.   If we motor at the same speeds in future we could be saving up to 20% fuel over previous consumption.  We have also found being pushed by this propeller into 30-40 knots winds is infinitely better. 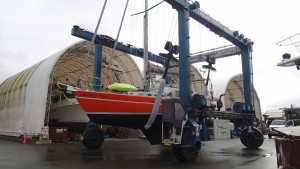 One small problem since we launched the windlass battery has had to be replaced with a new Yellow Top Optima.  We will be on our way tomorrow meandering amongst the islands and channels to the north of Strait of Georgia for about three weeks, goodbye to perpetual internet availability.

2 thoughts on “On the move again”