Brisk winds helped us south and then east towards Nome, accompanied overhead by thousands of noisy Sandhill Cranes on their migration from Russia. We arrived in Nome in bright sunshine to a harbour full of gold prospectors ‘boats’, this is the modern day high tech Klondyke, with dozens of family and partner run boats scouring the sea bed just off Nome for their fortune, the recent windy weather had kept them all in port. 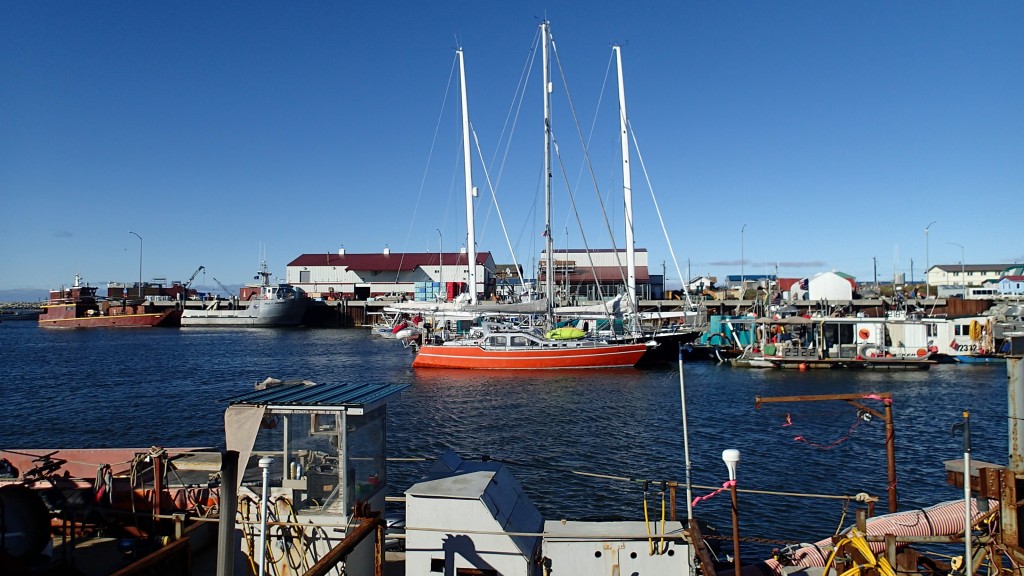 This eclectic group made for interesting conversations, some of whom had returned to crab fishing for a less erratic income. Nome had some ‘must see’ sights, most importantly the bronze bust of Roald Amundsen, the first small boat skipper to traverse the North West Passage which he started in 1903.

After two days in Nome which included a night of excess celebrating our success we said goodbye to Randall, Nick and Nikki and cast off southwards towards Dutch Harbour Alaska. 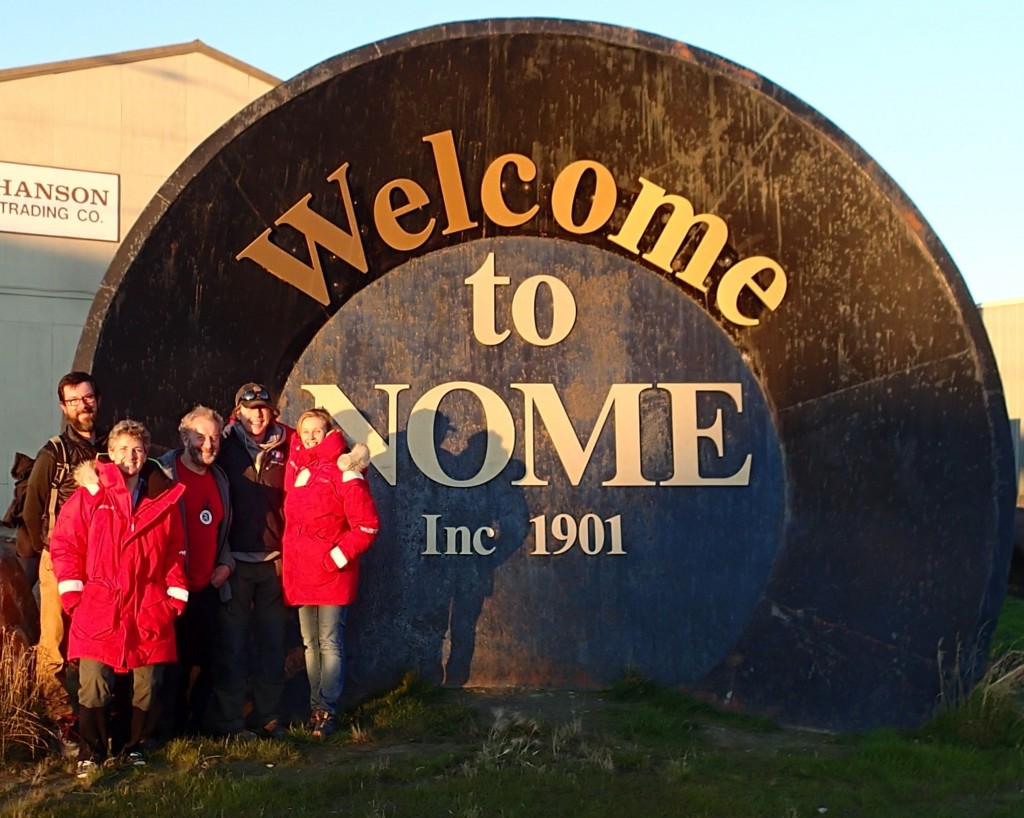 Arctic Tern seemed very empty with just ourselves aboard, however a fair wind set us off at a steady 6 knots towards Nunavik Island 250 miles away, there we planned to wait for about 36 hours to wait for a deep low that was passing through the Bering Sea to pass and for us to use the winds on the back of it to have a speedy trip to Dutch. While we anchored we were visited by some Inuits from the nearby settlement of Mekoryuk, their supply boat had just arrived but they were going off goose hunting.
We left Nunivik on the 24th Sept, keen to get clear of the Bering Sea before the very severe October gales and the icing of rigging became the norm. Twenty four hours out from Nunivik the north to north east wind started, this gradually built up to 30 -35 knots and with it an uncomfortable sea in these shallow waters. In addition to the tugs and barges that ply this part of the globe, fishing boats started to get more numerous. From Nunivik to Dutch is about 420 miles so three days of fresh northerly would suit us perfectly, not surprisingly the projected forecast only followed its’ prediction for 24 hrs, by which time it should have backed to the northwest and moderated to 25 knots, instead it stuck dead on north and increased to 40 – 45 with gusts touching 50, fortunately Arctic Tern is built for such conditions even if her crew are not! Thankfully our autohelm behaved impeccably despite our Arctic-ed out batteries needing regular charge ups.  By far the roughest leg of the whole trip.

We arrived in Dutch Harbour early on the 27 th pleased to have a large easy to enter harbour and a friendly harbour master, who directed us to the sheltered Iliuliuk Harbour where his staff met us to take our lines at 7.30 in the morning, all for 16 dollars a night!! We tied up next to Harold on the Fram, a single hander from Australia who knew friends of ours from Aussi, a small world. 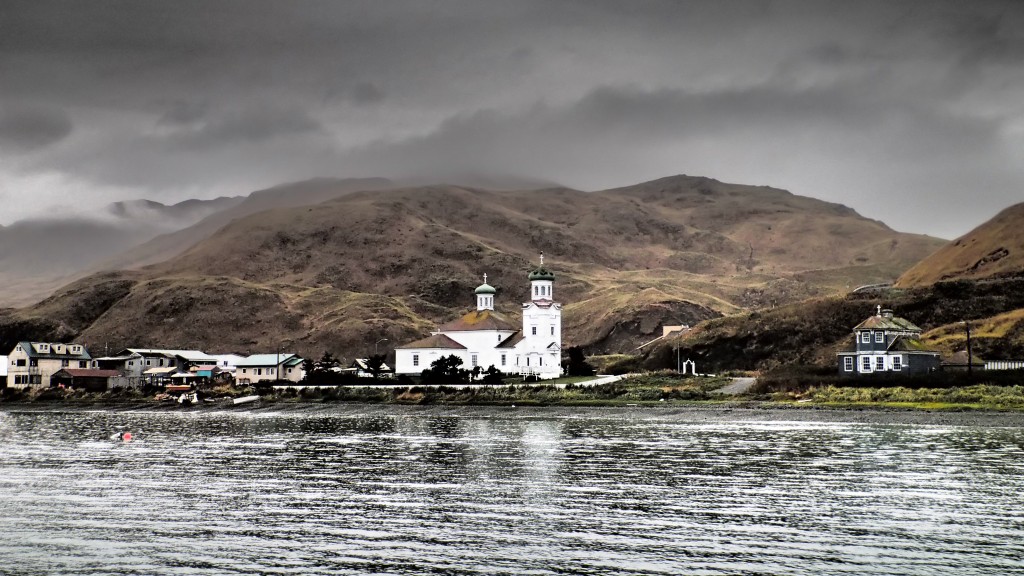 Dutch Harbour is a bustling fishing port of deadliest catch ‘fame’ with huge fish factories all manned by Koreans and Phillipinos who are flown in for the fishing seasons. Our harbour was surrounded by grassy volcanic mountains with thriving blueberries ripe for eating, delicious.
We had now sailed some 5778 miles since leaving Lewisporte and winter was rapidly approaching, with a light dusting of snow one morning to remind us, we were now thinking of where we would over winter, fortunately there are, east of Dutch many choices of excellent fishing harbours every 150 to 250 miles. Weather is a mixture of strong SE or N to NE over the Aleutian Peninsular with its dramatic 6 – 8000 feet mountains and the strong katabatic winds they develop as they come over from the Bering Sea. We decided to see how far up the coast we could get, our earlier hopes of Glacier Bay area now looked a distant wish!
We left Dutch on the 2nd October heading out through the Akutan Pass, timing our passage to take advantage of the 5 knot current to carry us into the Pacific, 200 miles away is Kings Cove, with a very open and nowhere to hide coast for the first 150 then between islands amongst magnificent scenery reminiscent of Skye. A mixture of sailing and motoring topped off with some heavy motor sailing saw us into Kings Cove where we stayed for two nights before pushing on to Sand Point a short day sail away. 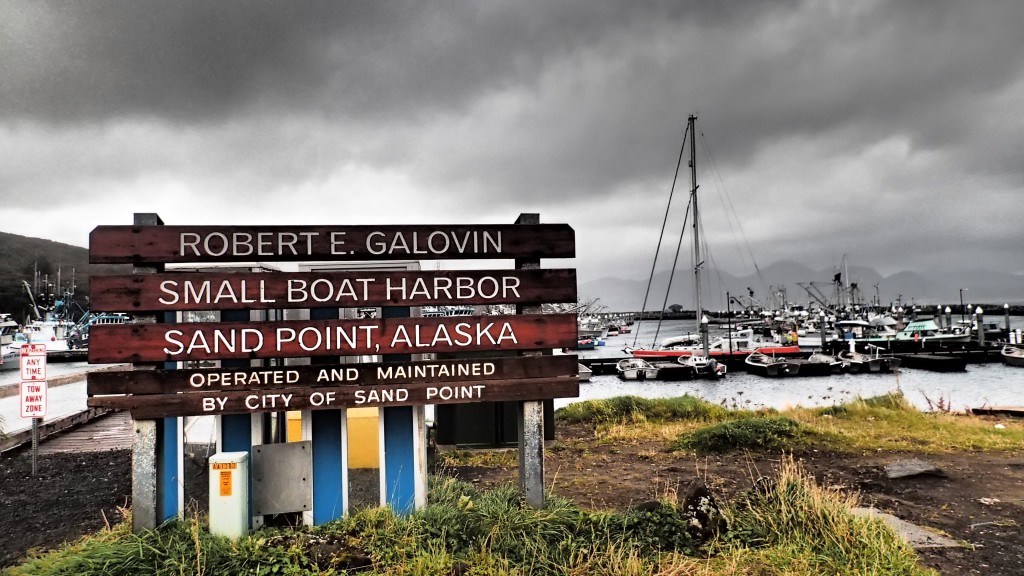 A windless two days was forecast so we set off from Sand Point towards the Shelikof Strait that separates the Alaskan Peninsular from Kodiak Island, should they be needed anchorages were more plentiful and we had been recommended by several other cruisers not to miss Geographic Harbor, 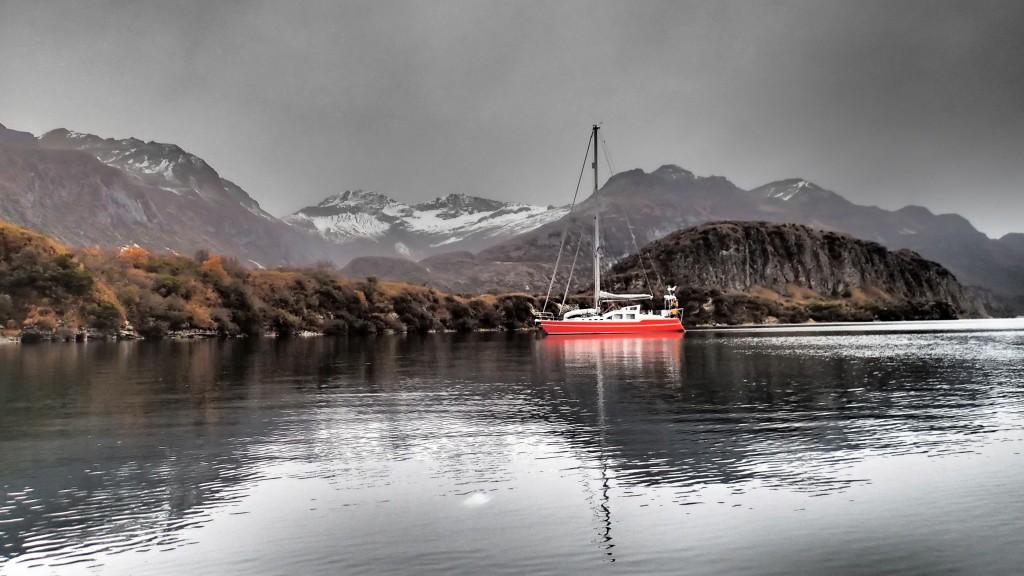 even though it was not the salmon run season and the bears would be high up the slopes we made this our destination, we arrived in bright sunshine and no wind with sea otters all around and eagles keeping a watchful eye over their paradise,a magical place, to be revisited next year.
Friends of ours on the yacht Novara had planned to go to Homer for the winter but had run out of time and decided to stop in Kodiak, we also were going to Homer, but comments from locals about the 4 mile sand spit to the town dampened our enthusiasm, along with the heavy head winds we encountered after leaving Geographic so taking Andrew from S/Y Young Larry’s recommendation Kodiak seemed like a very good idea, the old man wanted a proper rest!!