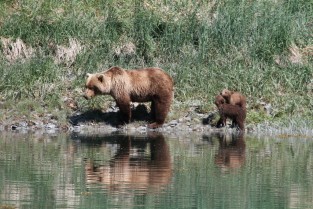 After a mild winter in Kodiak we left the emerald isle in bright sunshine wearing shorts and shades, 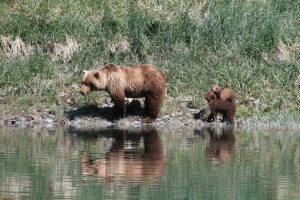 not what we had been led to believe about Alaskan weather.  This continued for a couple of weeks seeing us across the Shelikof Strait into the Katmai National Park, a couple of anchorages had been pointed out to us by a local fisherman, guaranteed to see bears and see bears we did, the first night we anchored there were four males on the beach searching for clams.  That evening we were treated to a mother and two cubs promenading along the beach, completely uninterested in us. 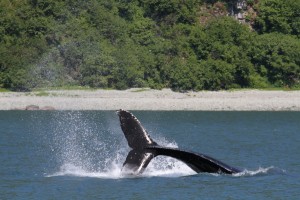 Leaving the fjord the following morning a humpback whale caught our attention as it breached a hundred meters from Arctic Tern slapping his tail as he landed.

By lunch time we entered an interesting cove enterable only at high water through a narrow passage we thought might be good for fishing,  the idea of fishing soon left our heads as we dropped anchor and a sow with two tiny cubs looked at us for disturbing their peaceful dose in the grass not thirty metres from where we are anchored.  We watch them for the next couple of hours playfully fighting, until a young adult male scent was smelt from across the bay unbeknown to us, the mother scurried into the bush, a couple of minutes later the male appeared sniffed the area they had been playing in and he too disappeared in to the bush.  The rest of the evening was taken up investigating the shores of this tiny cove by kayak. 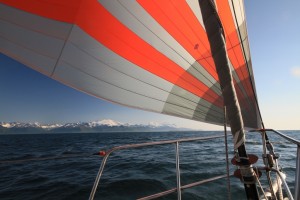 Leaving the next day on high tide and taking advantage of the fine weather we sailed with our new light weight cruising chute from Crusader Sails UK on a magic furler, it worked really well with the bowsprit we had had made in Kodiak giving us speed in light winds without having to use the engine. 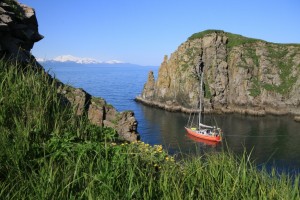 In such settled conditions we decided to anchor a night by Nukshak Island tucked into a small bight with lines ashore, we could sit and watch the birds perform their mating dances, with the snow capped mountains of the Alaska peninsula in the distance while enjoying a glass of red wine. Life doesn’t get any better than this!

Moving on towards the Kenai Pennisula we crossed Cook Inlet  close to Ushagat Island one of the Barren islands, again we had super visibility of the volcanos on the peninsula that shape this fantastic landscape.  Arriving that evening Port Chatham a sheltered anchorage with friendly curious sea otters, noisy eagles and incredibly green hillsides with silvery slithers of waterfalls.  Trip ashore to the crumbing old cannery with parts of an old steam boiler on the beach made for interesting beach combing.

Rounding Pt Adam the following day we had re-entered civilization, trip sport fishing boats were seen and heard bobbing around Flat Island, each boat reeling in Halibut up to 30lbs on a regular basis, our kind of fishing.

Making our way up the Kenai peninsula towards Kachemak Bay stopping in Port Graham then Seldovia for the summer solstice music festival, Using our bikes to explore the town and a couple of the local trails then rewarding ourselves with a good meal and an Alaskan Beer on the Boardwalk Inn’s  terrace whilst watching the world go by in beautiful sunshine.

Moving on we stopped in Halibut Cove before getting to Homer where we had intended to spend the winter, we were really pleased we didn’t not because Homer is a bad place, it’s just the spit really is the longest inhabited spit in the world and during the winter we think we would have been the only inhabitants! It would have been a long four and half miles to the town of Homer on cold wintry days on a bicycle. 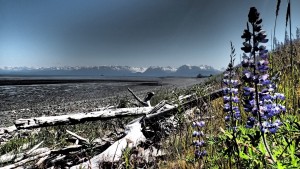 During the summer the spit is a hive of activity fishing charters leaving every day returning with hauls of halibut which is expertly filleted and packed for you while you enjoy a beer in the Salty Dawg Pub! RVer’s camp on the spit in summer, the wild lupins in the grasses as you cycle the spits path make a beautiful foreground for the breath taking backdrop of the mountains and Kachemak State Wilderness Park, an inviting cruising ground for the locals. 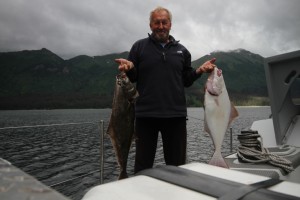 From Homer, Ali made a whistle stop trip back to the UK for her sister’s wedding, meanwhile Les returned to the fishing grounds to secure his own catch of Halibut, also looking for a suitable beach to dry out on, he found this in Bear Cove at the head of Kachemak Bay, enabling him to check the anodes and clean the propellers winter growth of barnacles. 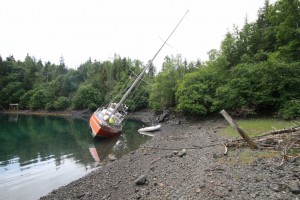 Returning to Homer to meet Ali and set off for the Kenai Fjord National Park, weather took a turn for the worse before we could round Elizabeth Island, so we scurried in to Port Chatham for four days watching williwaws march across the bay to us, having enough force to rip trees out of the ground and the huge amount of rain turned the silver slivers of waterfalls into fierce torrents down the mountain sides.

Our first anchorage in Kenai was in Tonsina Bay where we arrived at 2.00 in the morning, just dark.  As we were rising next morning Diedier and Sophie on Sauvage appeared in the bay, that evening we shared a meal with them and had a jolly evening sharing stories. 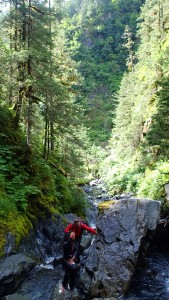 Anchored in Home Bay the following day the sun continued to shine, so a kayak round the bay investigating on old miners cabin filled most of the day, followed by BBQ fish for dinner.

Next day in glorious sunshine we both set off early for Yalik Bay some 12 miles away to see if we could find a way up to the Yalik Glacier, despite several attempts 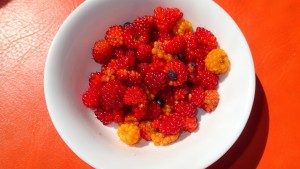 up some fairly dry riverbeds we were either beaten by vertical waterfalls or dense rain forest. However a good day’s exercise and the berry picking  was excellent! Back on board anchored in 20 metres good sized cod were swimming beneath us, one made a good dinner for us all and another for the freezer.

We were keen to get to the Northwest Arm Glacier area before the weather changed but before we got beyond Granite Island visibility deteriorated so we entered the narrow channel into Taz Basin its vertical walls with conifers clinging to every crevice; here we anchored for the night. Next morning was thick misty rain, with little prospect of improvement in the forecast we pushed on to Paradise Cove on the Aialik Peninsular.

Continuous rain for several days soon got all the rivers in spate and the salmon were on the move, this was what we were keen to witness and sample. 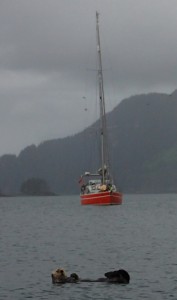 On our way to Resurrection Bay we came through the Cheval Narrows where at least 20 local boats were trolling for salmon, silvers were on the run. After about 20 minutes we hooked a fine 5lb silver which made for a yummy dinner, which we enjoyed in Sunny Cove.

Next day return to civilisation in Seward for reprovisioning, laundry and to pick up Fred Olivier who was joining us for ten days to study sea otters. Our planned departure on the 16th was thwarted by a Pacific storm, hopefully we get away tomorrow for the 60 miles around to Prince William Sound.

We have already decided that one season in Alaska is nowhere near enough, so we have decided to return for another summer.