We met Fred from the Train in Seward and hoped to leave the hustle and bustle of Seward as soon as possible but the weather wasn’t with us, so we stayed a couple more nights until a South Easterly had passed through.

Our mission with her was to seek out Sea Otters see what type of terrain they like and how is the best way to observe/study them? As well as cruising around in Prince William Sound enjoying other wildlife and the fantastic scenery. 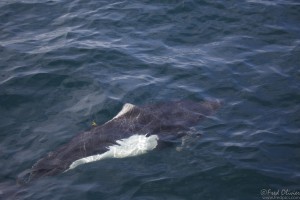 On leaving Resurrection bay we spotted puffins, kittiwakes, and guillemots.  Into the Pacific Ocean the swell from the passing storm didn’t stop the dall porpoises from riding our bow wave whilst passing the hostile coast with views of the glaciers from the Sargent Ice field. 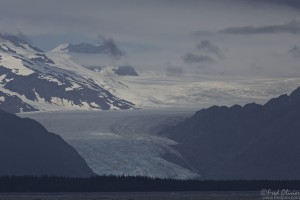 Turning up into Port Bainbridge and Hogg Bay for the night, here we saw harbour seals and were fortunate to catch a five pound silver salmon. 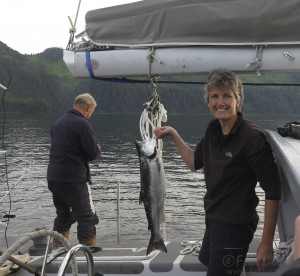 A walk ashore the following morning around the head of the bay where there were pink salmon  running with lots of evidence of bears, but no sightings.

Moving on we anchored outside Bainbridge Glacier and took the dinghy into the lagoon, meeting hundreds of seals on the ice floes, we shared a few moments with them before moving on to Puffin Cove whilst looking for a suitable spot to drop the hook we saw a baby bear, followed by the sow then a little ruckus and another cub appeared, they looked at us then ran off into the woods, not to be seen again, all to quick for the cameras!

Walking ashore the next morning really highlighted the wildness of Alaska it’s quite difficult to walk ashore with the Alder bushes growing so thickly, so we contented ourselves with blueberry picking instead,  this year is a bumper year or so we have been told. Yummy.

Moving on up through Bainbridge passage to the promising Otter Cove……not an otter in sight! 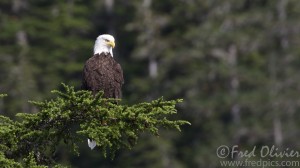 But lots of adult Bald Eagles and and five Juveniles watching the pink salmon running. 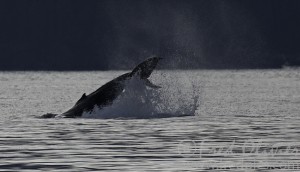 We did see a Humpback outside Whale bay to be fair and we not complaining as the weather was incredible.

Round to Icy Bay and into Nassau Fjord to Chenega Glacier the following day saw a change in the weather and a massive drop in temperature as we approached the snout, hundreds of curious seals were hauled out on the ice floes we kept our distance but Les still managed to get some good shots with his big lens. 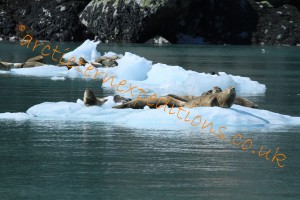 Moving on the Granite cove for the night the rain continued until morning, where we went ashore and explored a more open terrain beautiful  streams and lakes with lillies, massive blue Dragonflies went about their business, not once pausing long enough to get caught on camera! 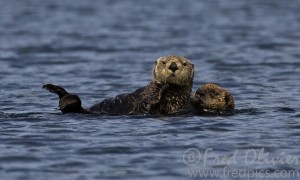 So we hide behind a rock in the dinghy

Thanks for sharing Fred. 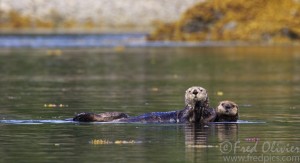 Dangerous Passage wasn’t so dangerous for us and the sun was starting to shine again, up towards Culross passage, passing Main bay, lots of salmon boats fishing outside the hatchery.

We too wanted to see what a hatchery was all about so the next day we visited the hatchery in Lake bay on Esther Island.  Dog salmon had finished running and Pinks were next.  A lovely boardwalk to the falls and berry picking saw out the rest of the day.  It’s at this point we turned to head south back to Seward to drop Fred off and meet our next party. 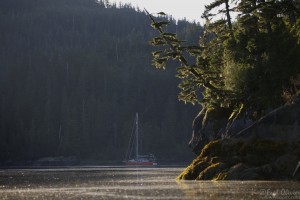 On our way we visited Knight island stopping at Lower Herring bay, entering Copper bay, and then heading west through Prince of Wales passage anchoring in Fox Farm anchorage to watch a couple of purse seine fishing boats haul in a few rounds and a bow picker set his net and Humpback Whale dived under it!

Back into Resurrection bay the increase in number of pleasure fishing boats out to catch there prize Halibut, Kenai fjord trip boats, fast cats brought an end to the peace and tranquillity we had grown use to over the last ten days…….back to Seward boat harbour, the tourist shops and the full RV Parks! Here we wait for our next visitors.

2 thoughts on “From Seward into Prince William Sound and back”