We left Victoria on the 22nd of April starting a two and half month trip with minimal stops to the UK. A strong SE wind had been blowing for about a week and was about to change in our favour enabling us to head down towards the Californian coast with the cold sea temperatures open to the full Pacific, we expected large swells.  Before we reached the end of straits of Juan de Fuca we had head winds and foul current, the weather hadn’t turned in our favour yet, so we anchored in Near bay just at the mouth of the strait, ready to pop out and head south.  The opportunity arrived the next day around lunch time we weighed anchor and motor sailed out, passing the local sheriff launch who asked where we were bound, “Mexico” was our cry, they wished us well and went about their business checking the local fishing boats.

Finally out into the Pacific one reef in the main sail to turned south,  the next days we had wind from every direction, fortunately the strongest ones were following winds, Arctic Tern performed well as always, however the wind steering Hydrovane had other ideas, its rudder  shaft bent and with the rough seas it was being levered off the transom, we worked hard for the next couple of hours to remove it and get it on deck, at one point it almost seemed easier to jettison it over the side as the 40kg of metal was becoming a liability, Les clipped on to the sugar scoop occasional chest deep in icy cold water and Ali trying to haul it on to the back deck, with a clever use of the dinghy davits it was finally secure.  Completely unusable and unrepairable we had lost our extra member of silent crew, hand steering now when we are sailing and when we had the power auto pilot would be used.  After nine days at sea we arrived in Ensenada Mexico just over the border from San Diego.  Tied alongside we met up with a family we delivered a boat for nearly ten years ago, great to catch up, they knew the place well, and had a car, immediately ferried us to the grocery store and a local place for lunch.  We stayed two nights as the Mexican official’s didn’t work weekends and the whole purpose of stopping in Mexico was to get a Zarpe (permission to leave and enter) so when we arrive in central America, El Salvador or Panama we would have the right paper work, if we turned up in Panama without a Zarpe it’s possible to be detained and fined.  The USA or Canada don’t issue zarpes and fortunately the Mexicans understand this and deal with the paperwork.  Ensenada was an excellent place to check in and out as the Marina staff does it all for you taking you to the correct offices, filling all the forms in and translating.  We were advised not to bother with a temporary import of Arctic Tern as we were only transiting Mexico on route to Panama, our next stop was to be Bahia del Sol, El Salvador.  A Zarpe was issued for El Salvador, the following morning we said farewell to Pickles and went on our way. 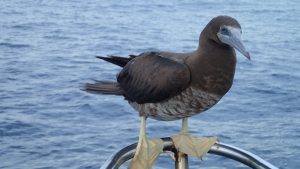 As we headed South the sea temperature shot up and the exhaust temperature alarm had to be readjusted, everything was getting hot and hotter again, at least when sailing there is air moving over the boat and through the cabin when conditions allow the hatches to be open.  Arctic Tern was built for high latitudes; her windows in the pilothouse turn it into a greenhouse if the shades aren’t drawn early.  Fifteen days of some sailing with the our fuel saving Crusader Magi furl cruising chute, and days of motoring the sun outside was hot enough but having a 75hp ford diesel engine throbbing out heat too made for a very hot trip most of it was spent in the cockpit under a make shift tarp we tied up from the dog house to the goal posts.  Everything was going so well until dusk off the coast of Guatemala we saw a couple of open boats quite a way off, then we saw a couple of Gerry cans in the water then the engine slowed, quick action into neutral, we were surrounded by an unlit net, the small open boats occasionally turned a light on the tell us they were there, but we weren’t going anyway we were anchored by our prop shaft. Lines and gerry cans bobbed around the boat as darkness fell. Using our Gopro camera on a long stick just before it got totally dark showed us a line wrapped several times around the shaft and a line each side of the rudder.  It was getting to dark and the swell was too big for a trip over the side, we would have to wait until morning.  Taking turns to keep watch with the stern of the boat facing the swell slamming waves into the sugar scoop mean sleep was impossible in the aft cabin.  Middle of the night a turn of the tide we were suddenly facing the other way and the rope to the nets went lose for a long enough period of time for Ali to jump down onto the sugar scoop and cut the lines free from the nets but not free the prop.  This was the biggest stroke of luck we had as we could raise the sails and start sailing away from the other nets, in the lightest of winds….1knot 2knots making progress south all be it slowly, within half an hour we were heavily reefed head sail only dropped main and were running down wind in a 50knot squall surrounded by blinding lightening lasting for the next hour or so, how pleased were we not still to be anchored to those nets, our thoughts returned to the fisherman in those little open wooden boats, perhaps this was just another day in the office for them, a hard life.

By day light the wind had dropped to nothing and again the swell too big to contemplate a swim, we used our Gopro camera again to look at the prop and as we had acted fast there was only a couple of turns of the rope on the shaft, by identifying which end was which we turned the prop shaft from inside and managed to winch the rope slowly off the shaft, checking with the Go pro with every turn, a slow job as we don’t have the latest Gopro with Wi-Fi.  Once clear Les checked the bearings, we started the engine and put it into gear away we went.  With this little delay we had to wait outside in the swell at the entrance to Bahia del Sol as we could only enter at High Water and with aid of a local pilot. We had been in contact by email to the pilot.  Sure enough at the time they said they would be available we called on the VHF , answered by Jean Strain one of the organisers of the “cruisers rally to El Salvador”, the pilot and her partner Bill Yeargan will be out to meet us shortly at a prearranged waypoint, and do we like Rum?  What does one reply but “yes” 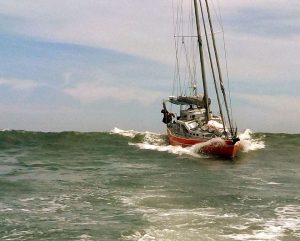 In the distance we saw a small boat motoring in the surf, up then over the top of a wave, completely disappearing from sight then reappearing at the top of the next breaking wave, and this is the way in…..there are no charts of the area, our Garmin plotter has a white chart,  Navionics had a thin dotted line on the white chart labelled as the recommend route and CMap just showed the area as breakers…..we were to follow this little motor boat that drew nothing into the estuary whilst our 2.2m draft looked at least as big as the breaking waves!  Made contact with Bill he said follow them so we did……the photos are courtesy of Cruisers rally to El Salvador and Bill took them as we surfed in behind them, 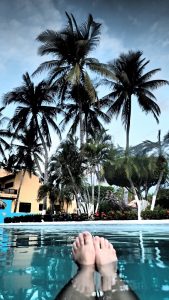 quite an exhilarating entrance to then be greeted on the dock to take your lines all the necessary officials and Jean with a couple of glasses of ice cold Rum punch, what a welcome, we could see why people came and stayed for weeks, we didn’t have that luxury.

Checking in and getting our next Zarpe could not have been easier, a fuel station just up the river with really clean fuel, and the marina was part of a hotel with Wi-Fi, restaurant, bar, pool, showers and would turn our laundry around in 24hrs.  We gorged on avocados stuffed with local prawns whilst drinking the local beer…..life was  good.

With regretted that we had to leave and press on south to be through Panama Canal and out of the Caribbean before the hurricane season, we have to keep moving.  The trip out over the bar was as exhilarating as the one in but without the rum! Again pictures taken by Bill (thanks) 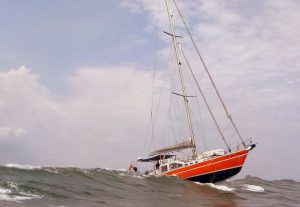 We anticipated a week’s trip down to Panama. We had decided to engage an agent to facilitate our transit this turned out to be a good move, leaving us time to spend on more important things….. ………..halfway down towards Panama after an gearbox oil change in El Salvador we checked the levels to find the box empty and the engine tray filled with ATF.  People ask us what spares do we carry? well with AFT we normally have a two changes, but we had just changed the oil so we only had enough for one more change and a bit, gear box oil changes are a scheduled event in the maintenance of an engine not something you need to check every day.  So we filled the gear box and watched for a leak sure enough the aft oil seal was leaking…….so we had some AFT…nearest country Costa Rica would cost us two days at least checking in and out… sourcing AFT, our Zarpe was for Panama not Costa Rica, and we had crew with flights booked to Panama arriving in a few days.  We emailed Ali’s father asking if we could substitute ATF for something else…..engine oil? Olive oil, sunflower oil? a marine engineer recommended the cooking oil as it was thinner  than engine oil and also said the gear box should be rebuilt when possible! After some surfing  Ali’s dad also found out that our Hurth Gear box doesn’t like the tropics and must have an adequate oil cooler! Arctic Tern does have an oil cooler but only a small one to the hull side, and therefore in tropical waters not a lot of cooling takes place.  Les managed to shape a plastic container to fit under the gear box leak and catch the ATF, we then stopped the engine every two hours as it was now completely wind less, collected the ATF from the collection device, and poured it back into the gear box.  This went on for the next two days, depleting us of both of sleep as it had to be a joint operation in the red hot engine compartment making it a sweaty job, but it worked and got us to Bilboa Yacht Club where we picked up a mooring waved to the water taxi and headed for the bar and a much needed ice cold beer……………